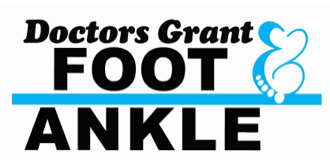 Are you diabetic? Have you had a foot exam? You need to.
For decades thousands of individuals with early stages of diabetic foot in Virginia Beach, Chesapeake, Norfolk, Portsmouth, and Hampton Roads have counted on Dr. Grant for medical treatment. What they have found is a compassionate foot specialist who cares about their well being.

Are you suffering from advanced stages of diabetic foot?
At its most advanced stages, diabetic foot is life threatening. Dr. Grant has dedicated a majority of his career and focus on helping these patients return to health and enjoy life as they once knew it.

On an advanced level, Dr. Grant’s approach to severe diabetic foot includes:
• Treatment of severe limb which threatens diabetic foot and ankle infection.
• Reconstruction of diabetic charcot feet and ankles.
• Amputation of portions of the foot, and reconstruction of the remaining portion to allow walking on it.
• Perform skin grafts.
• Click here to view Dr. Grant’s Diabetic Foot and Ankle Disorder presentation to EVMS in April 2011.

The Diabetic Foot
I had an academic interest in the diabetic foot, virtually, since beginning to practice here in Virginia Beach in 1984. Because I originally had an interest in neurosciences, the fact that diabetes produced significant neurologic changes in patient’s feet was an issue that gained my constant attention. Furthermore, since many of the problems that affect the diabetes and the foot are associated with a combination of numbness and high pressure on different parts of the bones, my engineering background also came into play. I came to recognize that the mechanics of gait and the foot, were abnormal, were directly tied to the development of diabetic ulcers and infection.

Trained as a foot and ankle surgeon, I embraced the possibility that I could surgically realign bony segments and decrease the likelihood of amputations in the diabetic population. This has become a lifetime’s work.

Fundamentally, diabetes mellitus causes changes in all of the tissues of the body. This includes blood vessels where the metabolic disease causes an accelerated accumulation of plaque in the vessels throughout the body. This is seen in the lower extremities, especially below the knee where decreased blood flow can result in a tendency to develop ulcers and infection.

Diabetes mellitus also causes changes in sensation and motor function from its effects on the nerves. This means that the person suffering from diabetes often can’t feel a sore developing. But it also means that since the motor nerves are affected, the shape of the foot frequently changes, with clawed up toes and very prominent calluses on the ball of foot. These areas of structural deformity are places where sores and ulcers can form more readily.

The nerve damage of diabetics also causes changes in sweating of the feet, which can result in dry, very coarse skin, which can allow bacteria to enter into the body.

Our practice pioneered in many treatments to salvage serious diabetic foot problems, and we have published numerous peer review academic papers. Chapter is an textbooks foot and ankle surgery, and lectured nationally and in Europe about the work.

#1 the EZ frame, which I invented more than 10 years ago, as an external fixator that can be used to compress bone segments in surgery or reconstruction or off-load wounds so that no pressure was on them while healing. This device is now manufactured by Wright Medical Corporation, a large orthopedic company, and it is distributed throughout the United States. It is gaining more and more acceptance as a useful tool in limb salvage.

#2 the G BEAM a stainless steel beam placed within the bones of the arch of the foot to support the body’s weight in diabetic Charcot foot, a highly destructive and complex disorder which can affect diabetics who’ve had the disease and neuropathy for a long time. The G Beam idea is based on bending moment calculations to produce an internal steel rod that will hold the patient’s weight even when the bones are failing. Its purpose is diabetic limb salvage.

A passion to help
All Podiatrists are not diabetic foot specialists — but Dr. Grant is. “My passion from early in my podiatry medical training was to help people with diabetic foot to continue to walk,” says Dr. Grant. “If I can help someone avoid amputation of their legs, I feel I have done something magnificent for that person.”

Dr. Grant has authored numerous journal articles in the field of diabetic foot care and research, and currently serves as the editor of the Journal of Foot and Ankle Surgery’s section on Diabetes. 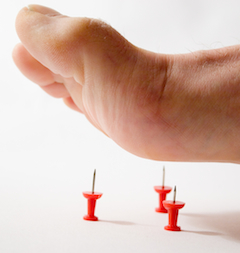 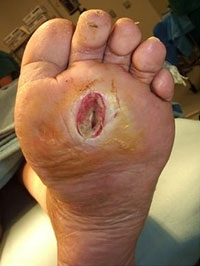